You know you're a Sunday Footballer when...

Whether with your club or your friends, on Fifa or Football Manager, at the stadium or on your sofa, you will surely find yourself in one of those situations that characterize the prototype of the Sunday footballer

- You came this close to signing pro. But you crossed paths. Without this bullshit injury you would be a good little Ligue 1 player. Or Ligue 2. Or CFA. Or nothing actually.

- You returned Football Manager. You won everything with the US Créteil St Maur Lusitanos. It must be said that saving before matches to restart the game after a defeat helped you a lot. But you always denied having done it.

- At the stadium, you sometimes insult the referee copiously. One day you heard the little one next to you repeating what you had just said. So that calmed you down a bit.

- Among your best friends, you have one who can't stop playing puns with soccer players. Like, "You got me Gerard Piqué my shock bread", "I don't care about Ruben Barajasse of your story". It is the same one who has a collection of a hundred jerseys at home.

- On your phone you recorded the video of your acrobatic kick, filmed by the Five's cameras. You play it over and over again in the bathroom or when you're bored on the plane.

How can you not put on a jogger when you're goalie with that pitch? - When it's your turn to go to the cages, you act like you forgot.

- You got screwed several times at home because of the little black balls brought back from the synthetic. Besides, now you empty the marbles of your incognito shoes on the sidewalk before going home.

- You got eaten a "Hey it's not the World Cup" from an opposing player because of your supposed excessive aggression. So that pissed you off even more.

- In your opinion, no other song has as much flow as Doc's "Passing of Legs"

- You knew the first generation synthetics in sand. You tackled elsewhere on these pitches and you will keep the pizza scars on your legs for life

- You know guys who show up with the full panoply of the latest Nike tracksuit are big boobs.

- You've already hurt yourself while attempting a Papinade.

The famous false touch, the famous linesman you want to strangle - You've already denigrated the little fat guy from the team to bring back because a player was missing. You quickly regretted the first touch of the ball.

- You started your career as a striker then moved back to the wing, then to defense and then to the bench.

- Your one and only fight with your best friend was when you were playing against each other. So now you refuse to play if you are not on the same team.

- You made yourself captain of the team to be sure to start every game and wear the number 10 of the team.

- Have you ever made mouth noises when the opposing player is about to take the penalty, to distract them And sometimes it works. But after confused.

- Have you ever wanted to smack the linesman who raises his flag with every move your team makes and turns out to be the father of a football player? opposing team

- You know that football locker room smell. A mixture of the smell of leather, humidity and perspiration. And you like it my pig.

- You were ashamed the first (only?) time your mother came to see you play as a youngest when she shouted “Go! Grab it! »

- You have a teammate who always forgets his shirt, his shorts, a shin guard or a sock. As a result, the other substitutes pray that he does not enter the field so as not to have to undress to pass him his equipment.

Gege, draw us a straight line - You do everything not to wash your team's shirts. Besides, the last time it happened to you, you asked your mother to do the machine.

- You arrive at the match half the time drunk from your evening the night before.

- You have already been shot in the private parts by a negative temperature. That day you became a man.

- You know the cold showers that send out a hot jet every 10 seconds. Besides, it was a good excuse you used for not taking your shower.

- You already pretended to look away to avoid being on the team of null. 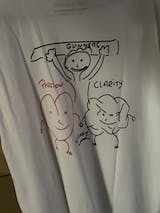